2020; year of the Staycation and Road Trips! WanderLove is calling – and adventure is the destination. Reconnect with what you love this summer/fall on an epic Virginia road trip. Pack your weekend bag, throw the dog and kids in the car, and hit the road to Hopewell & Prince George! It doesn’t get more Americana than driving the Five & Dime. The circuitous route along Routes 5 & 10 winds its way through Hopewell, Prince George County, Charles City County, Surry County, and Jamestown, Virginia. Easily done in a day, or spread out over a weekend, the Five & Dime tour offers history, outdoor adventure, live music, exceptional food and drink, and hidden gems galore. #WanderLove is in the air!

The North side of the Lower James River is chock full of things to do. Charles City County’s main thoroughfare is historic Route 5, designated a scenic Virginia byway. Historically, Route 5 was a wagon road between Virginia’s Capitol, Richmond, and the former colonial Capitol of Williamsburg. Along Route 5, you will pass a plethora of historic homes and former grandiose plantations among them Shirley, Sherwood, Berkeley, and Westover. History lovers revel in the colonial architecture and fascinating stories behind these structures and the people that called them home.

If you want a more active way to experience Route 5, bring your bikes and peddle the Virginia Capital Trail. Ideal access points for Five & Dime travelers are located at Upper Shirley Vineyards, the intersection of Route 5 and 156 (which connects Route 5 & 10 via the Benjamin Harrison Bridge), Charles City Courthouse, and Jamestown Beach by the Jamestown-Scotland Ferry. Didn’t bring your bike? Never fear. There are plenty of rental options in the area.

For dining options, consider several of the hidden gems located along Route 5. Upper Shirley Vineyards boasts a delicious menu from Chef Carlisle Bannister (how regal is that name!?), homegrown wines, and spectacular views of the James River. One of the favorite stops for locals and travelers alike is Cul’s Courthouse Grill. Situated in an old country store, Cul’s offers light fare and is a must-stop for cyclists on the Capitol Trail. They also have frequent live music and trivia nights. Another favorite dining destination is Indian Fields Tavern. This restaurant has an amazing ambience in an old farmhouse setting. While they are open for lunch and dinner, it’s the ideal spot for Sunday brunch. They often have live music on the weekends, too.

Consider starting the Dime portion of your roadtrip in Downtown Hopewell. For the music lover, check out the schedule of shows at the Historic Beacon Theatre, where you can catch world class performers from Graham Nash to the Oakridge Boys. If you want to get outside, take a stroll along the new Riverwalk at City Park, perfect for sunset views, fishing, and watching the local Ospreys hunt. History enthusiasts will appreciate nearby Appomattox Manor and General Ulysses S. Grant’s Cabin at City Point, headquarters of the Union Army during the Siege of Petersburg and visited by President Lincoln during the Civil War. The beautiful grounds are abundant with photo opportunities (in fact, Appomattox Manor is a favorite backdrop for local wedding photographers). For those that fancy angling, the surrounding waterfront is revered as prime fishing ground. City Point is also one of the best spots around to catch the sunset or sunrise. In fact, it’s what convinced photographer, Pedro Ledesma III, to do his latest project in Hopewell.

Before you head into the countryside, enjoy a meal at the Boathouse at City Point. With a fantastic view of the confluence of the Appomattox and James Rivers, The Boathouse offers a terrific menu, including locally caught oysters, craft brews, and a great wine selection. The Boathouse is perfect for a romantic, sunset dinner on the terrace. For other food options, go here.

Having explored Downtown Hopewell and City Point, turn East and head down Route 10 into Prince George County. Once a part of Charles City County, Prince George County became independent when it built a new courthouse on the South side of the River. Named after Prince George of Denmark, the county is home to one of the oldest churches in America, Merchant’s Hope, and one of the largest Czech/Slovak populations in the country, which settled in the little community of New Bohemia. 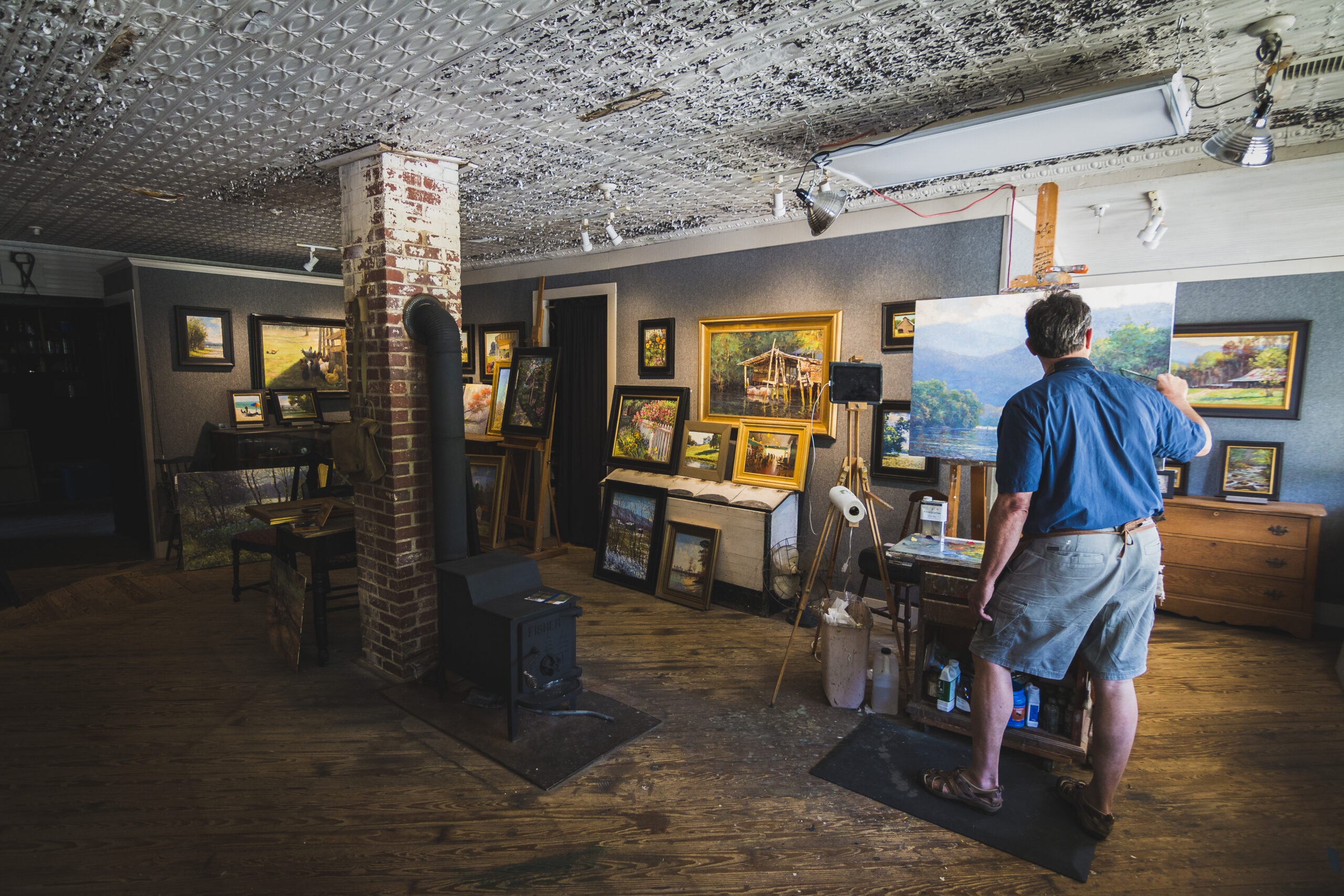 One of the hidden gems along Route 10 is the studio and gallery of local Plein Air artist, Ed Hatch. Hatch works out of an old country store that has been in his family for generations and his work is featured in galleries around the nation. The building alone is worth stopping to see. Inside, you can find Ed adding the finishing touches to a painting, or pulling out a blank piece of canvas to begin a fresh effort. The sign out front reads “open by appointment or chance”, so, you may want to call ahead and make arrangements in case he’s roaming the countryside painting. Trust me, it’s worth it and you’ll be glad you did. Many of the pieces in Hatch’s studio are for sale if you’re looking to expand your fine art collection.

No route is complete without a food stop. Driving East from Hatch’s studio, Route 10 intersects with Route 31, which takes you to the Jamestown-Scotland Ferry. Before you get to the Ferry, op into the Edwards Ham Shop of Surry for that oh-so-delicious pork Virginia is famous for. Grab a whole ham to go or sample Edwards finest on a variety of sandwiches, the perfect snack for the ferry across the James River.

Just down the road from Edwards Ham Shop lies the embarkation point for the Jamestown-Scotland Ferry, which will carry you to the North bank of the James River to the Historic Jamestown Settlement. Here you link back up to Route 5 and the Virginia Capitol Trail where you can loop back to Hopewell. 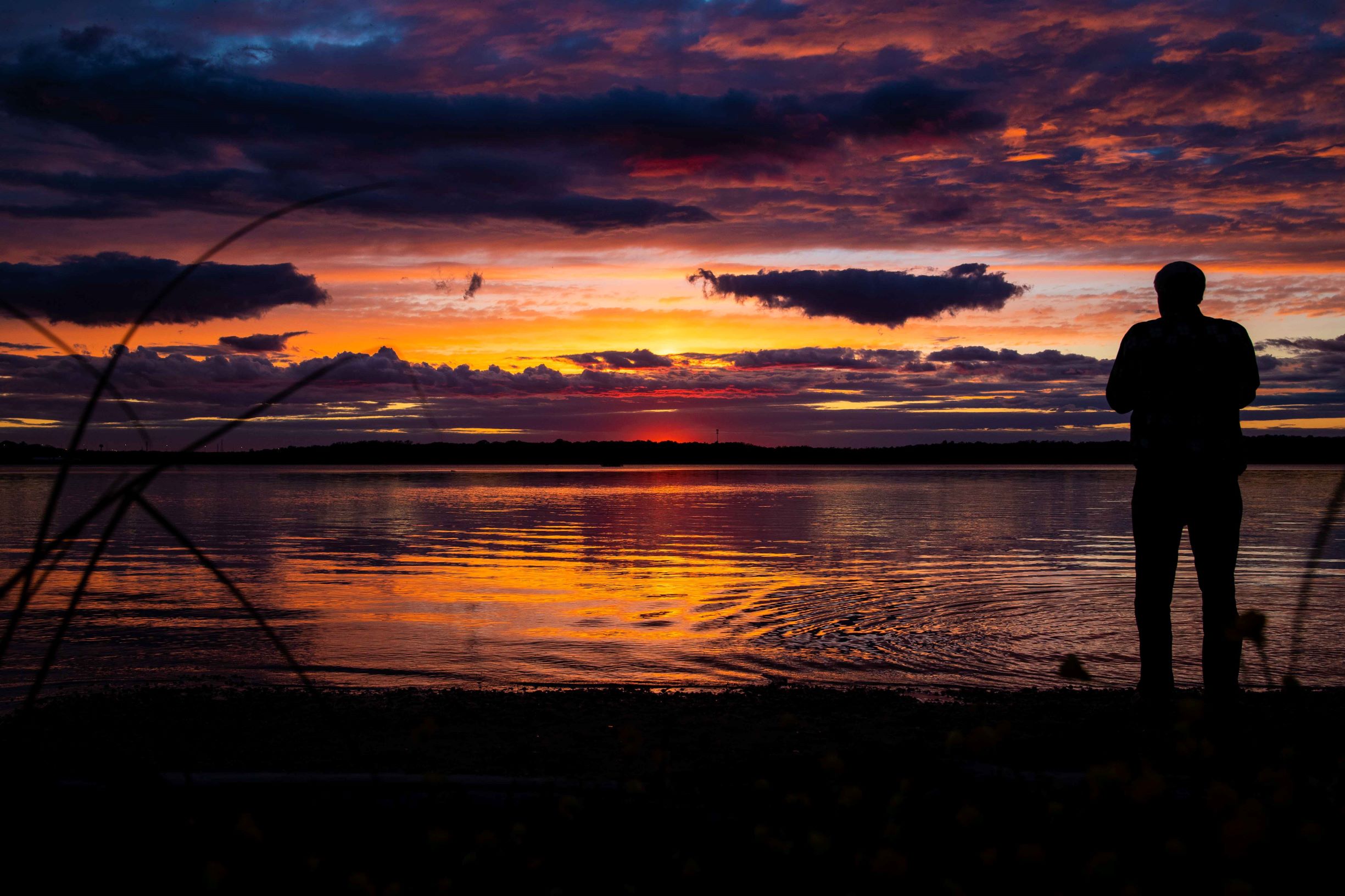